The unit incorporates the automated creasing technology (using a creasing rule and matrix)that has made the Morgana AutoCreaser a huge success in markets throughout the world. Morgana is also highly regarded for its folders throughout the world, but for the DigiFold the company has come up with something entirely new. The patented folding system used in the DigiFold dispenses entirely with buckle plates or conventional knives, using instead an electronically controlled ‘flying knife’ contoured around extra large diameter rollers and moving at the same speed as the material passing through the machine.  Rather than the solid deflector used in most folders, the DigiFold uses another patented device in the form of a dynamic sheet deflector that only comes in contact with the leading edge of the sheet. This allows single or multiple folds to be performed without risk of scratching or marking. 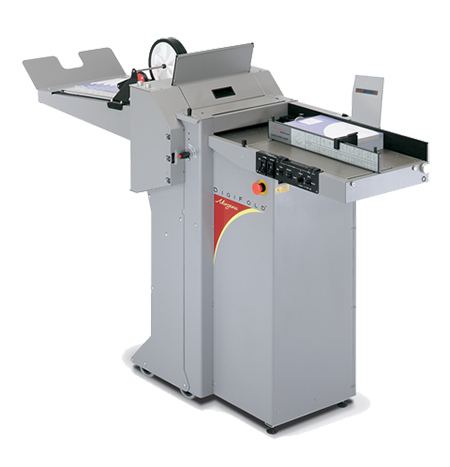